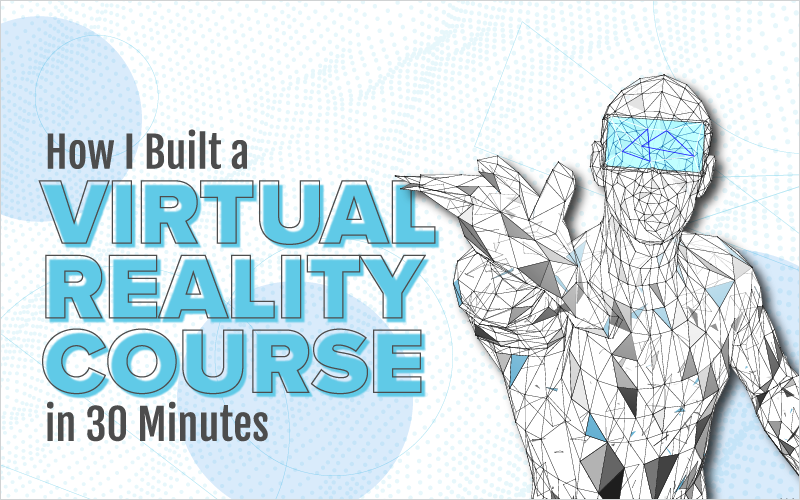 How I Built a Virtual Reality Course in 30 Minutes

Two years ago, I was at DevLearn with eLearning Brothers running the camera and audio at the eLearning Rockstars stage. I got to watch presentations from industry leaders who were talking about best practices in course design, learning management, and other awesome topics.

Then John Blackmon got up from Trivantis. His presentation was on how to build a virtual reality course in less than 30 minutes.

“Psh,” I thought. “Yeah right. It probably won’t be real virtual reality, or it’s going to be super lame.”

But then he did it.

Now you could watch the video recording of his session—that’s why I was there two years ago after all. But with the recent acquisition of Trivantis and all of its products by eLearning Brothers, I jumped at the chance to really dive into CenarioVR® and see if it was as easy as John made it look.

Look, I don’t even have all the fancy tools that you might think you need to make a VR course. I don’t have a 360 camera, I don’t have a super computer. I have a cell phone and a web browser, and that’s ALL you need.

Here’s How I Did It

As I mentioned earlier, I used my cell phone to do this. I have a Google Pixel 3, which has similar photo options as most other phones, including Panorama mode. However it has another photo mode that I tried out for the first time for this project, called Photo Sphere.

Now I'm sure that Panorama mode may work as well (I haven’t tried it, I have Photo Sphere after all). But this was my first try and this was looking so promising.

Step 2 - Log in to CenarioVR and upload the 360 images 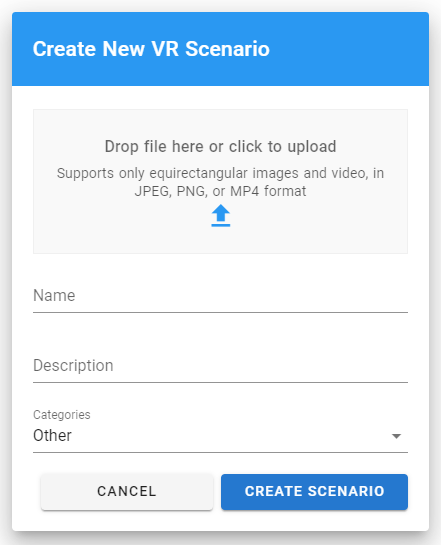 After selecting Create Scenario I was prompted to upload my 360 image. I named my Scenario as well and added a small description. I left the Category at “Other” since this was just me playing around.

Step 3 (Optional) - Play around in the newly created VR space

Of the two locations I’d created 360 images of, the first one I played with was my home office. It’s not glamorous, it’s a little messy. I’ve got kids who play in here as well, so there were toys around, snacks, my lunch still on my desk. But it was SO COOL to be able to spin around in the browser and see all of that displayed in fantastic virtual glory. 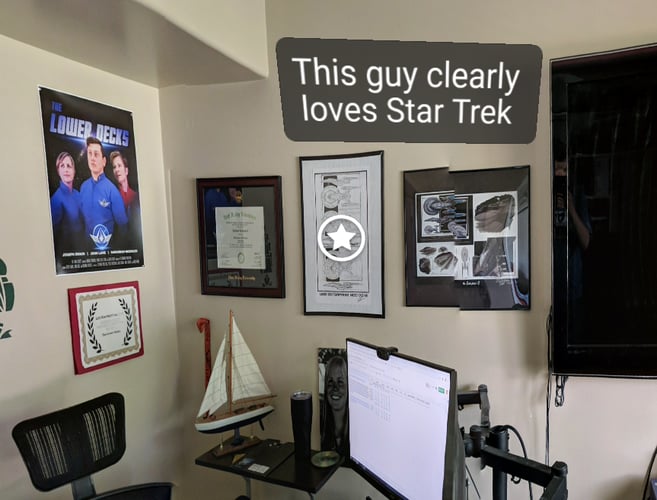 This is where the course really starts to come to life. I was placing hotspots on items that were interesting (sort of interesting at least, it’s just my office) and then creating data cards that would pop up once you clicked on the hotspot. Having the data cards hidden until a click was super easy as well and helped the space not feel cluttered.

There are so many content options to pick from as well. There’s question cards, info cards, audio samples, images, videos, and timers. Overall I played with info, question, image, and video.

Once I felt like I’d put enough information into my messy office space I figured it’d be nice to go outside. So I created a hotspot where the action was to go to another scene. 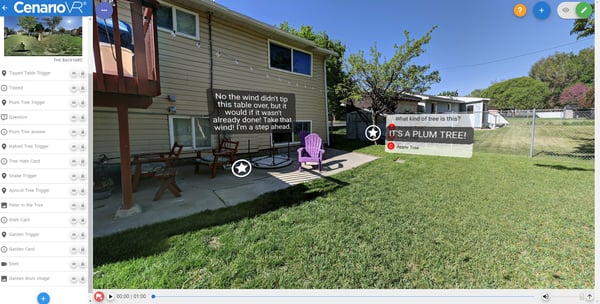 I put a lot more content into my outdoor scene, including a quiz sort of thing, images of my son, and a video of my neighbor helping me catch a snake. I’m terrified of them so the video is mostly me laughing in hysterical fear as he chases it around before finally catching it in a bucket.

Publish settings are extremely simple and it only took a few moments of poking around to figure out what they all were. Setting the course to “private” means it will only be seen by those who it is assigned to via CenarioVR, so I was able to send it to myself, but I couldn’t share it with my mom. And that was super important for this project. I mean, how else is she supposed to know my office is messy and my backyard’s grass is green for the first time ever? So I set the project to “public” and clicked the “Copy URL” button.

And BOOM! Just like that it was done! I can view the finished product on any desktop computer, I can text the same link to my phone, select the “Cardboard” button in the corner and stick it in my Google Cardboard or similar device and whammo—I’m in fully immersive VR!

So was it really as easy as John Blackmon made it look at DevLearn in years past? YES. Did it require that I have some fancy 360 camera technology? NO. Will I be working to develop a VR course that will somehow teach my son to use the toilet? YES. This is so cool and so easy. My mind is blown.

Taking It To The Next Level

Of course, being an Oculus Quest owner, I really REALLY wanted to get my course running on my fully immersive device. I jumped onto the CenarioVR community and looked up instructions on the install of CenarioVR and tips on how to do that. However I didn’t even need all of those instructions—as an avid Beat Saber player who uses SideQuest to side load apps and mods to my Quest already, it was as simple as installing the Quest/CenarioVR apk to SideQuest and I was good to go! 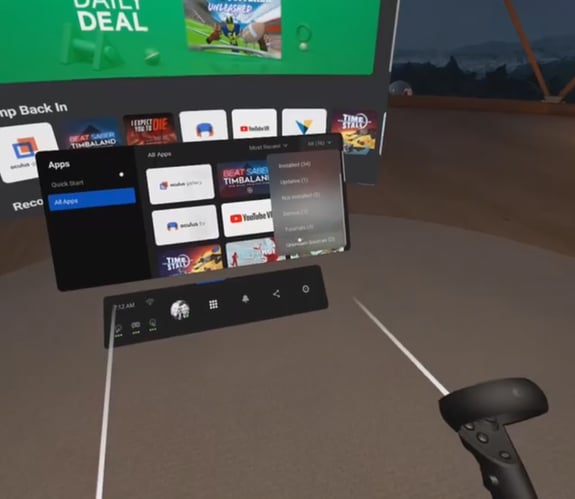 By navigating to my All Apps menu and then scrolling down to “Unknown Sources” (thanks to modding and side loading) it was easy to find the CenarioVR app.

Inside the app (which is gorgeous, by the way) I logged into my account and was able to see the course that I’d assigned to myself. 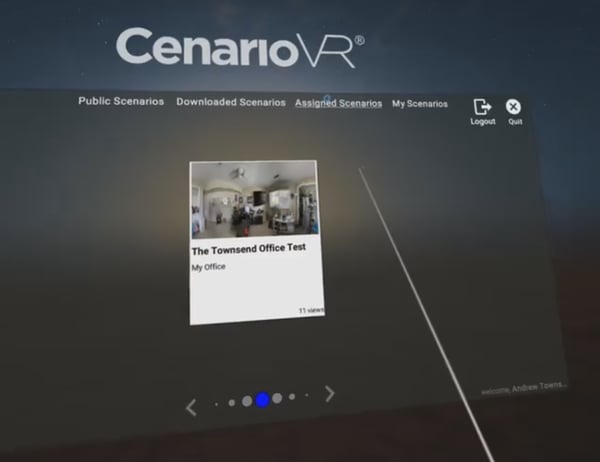 After selecting it and downloading it to my device, I clicked “Launch” and THERE I WAS IN MY OFFICE. Again. I mean I WAS in my office, but now I could SEE my office. Inception. I think you get it.

I did run into one small problem while in the Quest version of my course. One of the images that was in my backyard scene displayed upside down. It did not display that way on the desktop or on the mobile/Cardboard version. After thinking it through for a bit (and talking to one of the developers, lol, I’m not THAT smart), I realized that the image was captured on my cell phone and that because it was landscape and not portrait the metadata on the image was displaying a false “right side up.” I took that image, opened it in Photoshop, and simply resaved it with new metadata. Then the image displayed correctly in my Quest.

I recorded my course as seen in the Oculus Quest. Please don’t judge my office or my backyard too harshly.

All in all, this was so much fun! I’m excited to make more courses, and see VR continue to rise as a viable tool in the eLearning space! It’s so immersive, and so memorable that any training done in this fashion is likely to be hugely successful.

Want to try CenarioVR for yourself? Sign up for a free trial now. 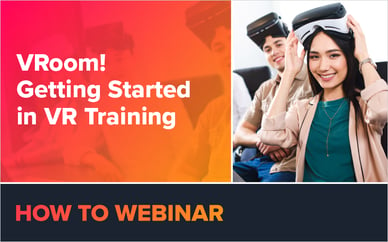 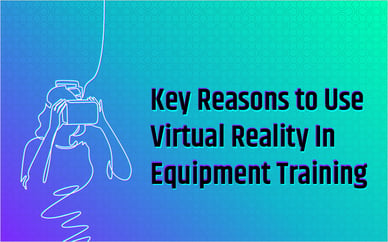 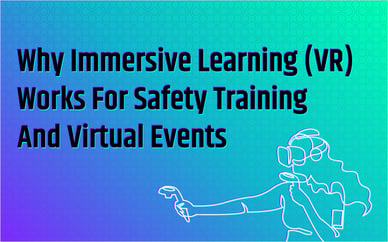 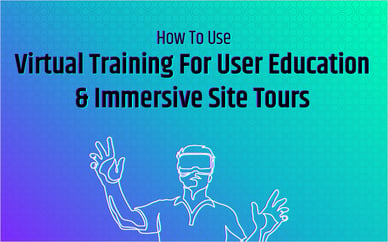 How To Use Virtual Training For User Education & Immersive Site Tours 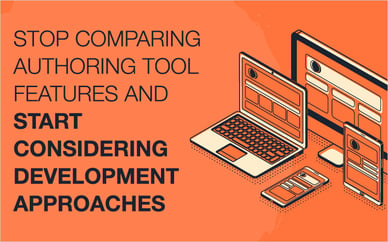 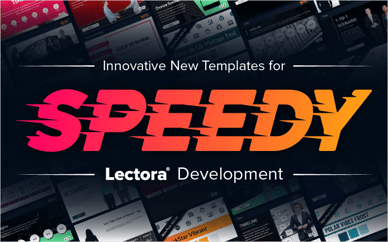